R.J. Stone says he was irate when earlier this week he kicked up the two homemade booby traps along an unmarked trail on the Frederick watershed near Fishing Creek Road.

“The only reason I found them is, I kicked the razor blade with my shoe which unearthed the wooden block they were attached to. The wooden block was buried a couple inches below the dirt,” Stone says.

Stone found the traps while traveling on an unmarked trail in the 7,000-acre city watershed north of town on Labor Day.

He believes the blades were meant to puncture bike tires or hurt someone. Stone says he has heard of others who have been finding traps for years along the watershed trails.

“Whoever is doing it, is doing it again and is back out there leaving these things all over the trails,” Stone says.

Mountain bikers have complained since 2013 about sabotage, including spiked boards and fishing line stretched across trails, reports The Frederick News-Post. The trails are used by hikers, bikers, horseback riders and all-terrain vehicles.

City and state officials have expressed concern about unauthorized trails in the watershed but enforcement has been a problem. City officials say they forward complaints to the Frederick County Sheriff’s Office. The sheriff’s office says it will meet with city police to discuss enforcement. 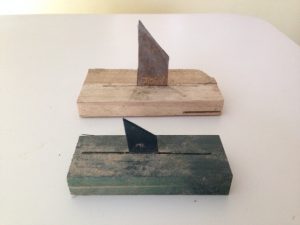